How Do I Go

The second largest city in Myanmar, and the last royal capital, Mandalay is brimming with religious sites and exciting markets having been largely rebuilt following destruction in the Second World War. While Mandalay is home to some impressive buildings and an abundance of culture, many visitors only spend a short time in this bustling city before moving on to even better destinations, such as the awe inspiring ancient city of Bagan. Visitors describe Bagan as being up there with the likes of Machu Picchu or Angkor Wat. It is one of the world’s greatest archaeological sites with more than 2000 Buddhist monuments, some that are centuries old. If you’re considering a trip from Mandalay to Bagan, read on to find out how to travel between these two cities.

Mandalay to Bagan is not a huge distance, and with several different transportation options, you can easily get from one city to the other. By road it is about 180 kilometers (112 miles), so if you were traveling in a private car or taxi it should take around 4 hours, depending on the traffic. Buses are another option, taking a little longer, and then there are trains as well which take longer still. Another popular option is to travel from Mandalay to Bagan by boat, and this is very scenic, but not good if you’re pushed for time! The quickest way to get there is by air but this is expensive. We’ll describe the pros and cons of each of these transport options so you can make your own informed decision.

The Fastest Way from Mandalay to Bagan – Flying

The fastest way to travel from Mandalay to Bagan is by air, beating any other mode of transport hands down! The actual flying time between these two cities is only about 30 minutes, so even when you add in time to taxi the airplane, and time to get to and from the airport at either end, it is still easily the quickest way to travel.

But, speed can come with some drawbacks, most notably the cost. Flying from Mandalay to Bagan is the most expensive way to travel largely because Myanmar does not yet have any low-cost airlines. There are however four different airlines to choose from so expect there to be a little competition between them, and you’ll have a good choice when it comes to finding a flight that suits your schedule. The airlines are Air KBZ, Asian Wings Airways, Mann Yatanarpon Airlines, and Yongon Airways, and they all fly into the Nyaung U Airport, the gateway to the Bagan region.

Although you will be missing some great scenery on the ground, you will likely be treated to an excellent aerial view of the temples of Bagan, so this alone can make up for the higher cost of the airplane ticket.

Mandalay to Bagan by Bus

For many travelers, the cheaper cost of the bus makes this the most popular way to get from Mandalay to Bagan. There are several different companies operating along this route, and prices and comfort levels can vary quite considerably. If you want to save your pennies and aren’t fussed about comfort, you could opt for a bus with wooden benches where you will be rubbing shoulders with the locals. Although this is a nice cultural experience it’s definitely far from comfortable so if you value air conditioning and padded seats, go for one of the more expensive options and you’ll have a more relaxing journey. It does, after all, take around 5 hours to travel from Mandalay to Bagan by bus, so it’s best not to go for the cheapest option.

The Train from Mandalay to Bagan

Catching a train from Mandalay to Bagan is another option, but not for anyone who is in a hurry! The train is very slow, taking at least 7 hours to complete the journey. The good news is that it’s affordable and quite comfortable too with spacious carriages, especially if traveling upper class.

There are usually two trains per day with Myanmar Railways – a day train and a night train. Taking the night train doesn’t really benefit you because there are no sleeper cars so you’ll be trying to stretch out on a regular seat if you want any sleep. Even so, the trip from Mandalay to Bagan takes in some of the most beautiful scenery so traveling by day would be recommended so you can make the most of that passing scenery.

Make sure you book the train early as Myanmar Railways requires bookings in advance (5 days) if you want to sit in the upper class.

From Mandalay to Bagan by Boat 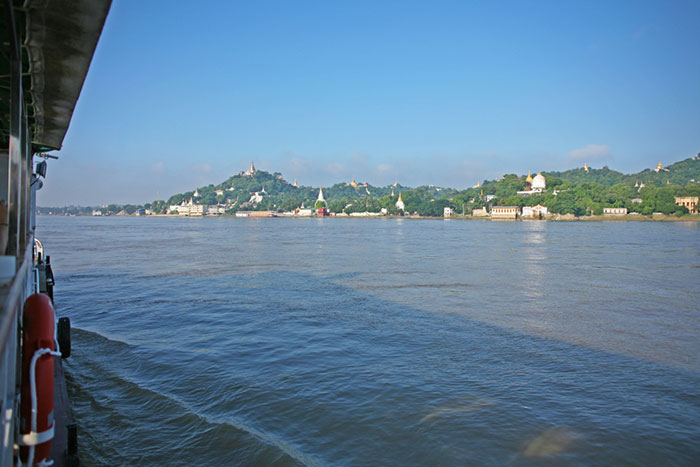 The final option is the slowest way to travel from Mandalay to Bagan but you could argue it’s the best! We’d strongly recommend you take a boat between these two cities if you have the time because traveling along the Irrawaddy River is spectacularly scenic.

You will be on the boat for around 10 hours, and, like the buses and trains, there are different options depending on your budget and the level of comfort that you would like. The commuter ferry boats were not designed for high comfort but they are cheap, however, we’d recommend spending a bit more to be sure you are comfortable. There are several different companies but try to find the one with good reviews so you know what you’re getting. The ticket prices will be more than the trains or the buses, but for the price you do get food included – breakfast, lunch and snacks, so you’re saving money there.

So those are the options for getting from Mandalay to Bagan. If you have the money and you’re pushed for time, a flight would be best, but if you’ve allowed yourself plenty of time in Myanmar, take the boat and enjoy the amazing scenery.

Da Nang to Hoi An

Dalat to Hoi An

ABOUT US
HowDoIGo is your guide to transportation in Asia. If you are looking for the cheapest, quickest and most convenient way to travel from point A to B then this website was made for you!
© Copyright HowDoIGo.asia 2017-2022